May I Borrow Your SIL?

E2 has had food issues for as long as she has been alive.

We started with the un-diagnosed milk allergy that created the most hellish 4 months I have ever lived through. After that issue was cleared up we dealt with SSB (suck swallow breathe) problems. By the time she was a year old, we had been weighing her weekly to avoid 'failure to thrive.'  At her year appointment, our pediatrician high fived me, hugged me, and said "You made it." I cried.

From 12 months to 22 months, E2 continued to struggle with food but we were so busy noticing her lack of speech that it never dawned on us she only ate nine foods. When she started speech at 22 months I remember telling the speech pathologist during our evaluation that E2 was a good eater - wtf? DENIAL.

THANK THE LORD FOR MY SISTER IN LAW, THE SPEECH PATHOLOGIST

During this time, we bribed with M&Ms, popsicles, ipad, computer, fruit snacks, juice, singing songs, sitting on my lap, other foods she liked, etc for her to take A SINGLE bite of something new. Hell, she got rewarded for kissing a green bean. In between bribes and meals, E1 complained that it was not fair for E2 to be rewarded and not her.

We traveled WITH food. If we stayed with family, we sent a list for the grocery store. NO DEVIATION, not even the brand.

(A moment of praise for Ms. Lisa. I am no picnic of a mother and she has been dealing with E2 (me) for two years now and is one of the best people I have encountered. Ms. Lisa is awesome)

E2 is not "normal." There is no such thing as "normal." E2 is happy, funny, live life to the fullest, determined, and yes, a picky eater. Some days, weeks, even months there is not a single moment of food struggles, not even for broccoli.

And then there was tonight....We were eating scrambled eggs (a favorite for dinner) and unless I fed her while simultaneously playing maroon 5's 'Sugar' on my phone, she was going to cry and refuse to eat.

What I have learned from all this?

EARLY INTERVENTION WORKS and most of all, trust your sister in law.
If you don't have a sister in law, I'll let you borrow mine....but only for a minute. My girls and I need her. 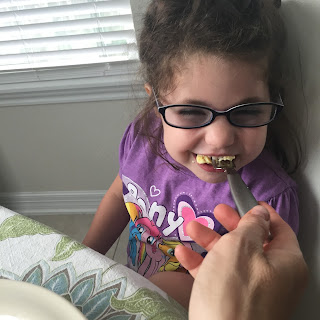 Posted by Tomboys in Tiaras at 4:21 PM