E2 does not like to poop, take a dump, have a bowel movement, or take a shit. It doesn't matter how you say it, the kid hates pooping. We are finally at 4.5 years of age in a position where she no longer holds it and given the right amount of fiber, she will crap.

This evening, the tippy toe walk began and I told her to go poop. She whined up the stairs, sat on her potty (the floor kind because she won't poop in a big potty), and took a huge smelly shit.

I wiped her ass (don't ask) and noticed skid marks so we walked to her room to get clean panties. We were approximately 2 feet from her bathroom when the unthinkable happened.

NO!!!!!! Get OUT!!! I grabbed the dog's collar and literally dragged his shit covered face to the backyard. WHAT THE HELL??? THE DOG ATE E2's SHIT.

I put him outside and fed him cheerios and milk because I assumed he needed something to settle the shit in his stomach? So gross. I don't even understand what would make any animal think that eating foul smelling shit is a good idea. You understand how to heel, how to sit, how to stay, but you cannot understand that smelly nasty shit is not food?? Maybe I should have the dog tested for a learning disability.

Now the girls are RUNNING away from him screaming, "GO AWAY POO FACE!" 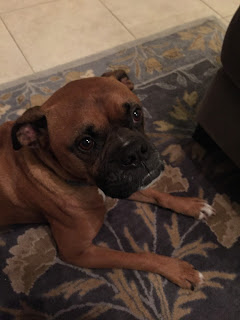 Posted by Tomboys in Tiaras at 4:19 PM