Won't You Be My Neighbor

The girls are putting on their shoes so we can leave for E1's tennis lesson. I open the back door to tell the dog to come inside and he is pouncing and digging in a corner. Crap. He has something. I yell his name, he does not stop. I keep yelling his name and the word 'no' over and over again, but the pouncing, digging, and now barking continue.

E1 knows the drill. My animal lover begins to cry and wonders what he has killed. Just this week he has already killed two lizards and I thought E1 was going to hold a funeral for these things. Lizards gross me out. I am convinced they are dinosaurs. For real. So gross.

We MUST leave. I yell the dog's name one last time and mutter some expletives. Wagging his tail, holding his prey, he starts running to the backdoor. I SLAMMED IT SHUT. HELL TO THE NO. That son of a bitch killed a turtle and wants to bring it inside.

E1 is now really crying because the dog killed a turtle. "A TURTLE?!? WHY?!? HE'S A BAD BOY!" Poor Apollo. He does not know any better. He protected us from this turtle.

E1 and I discussed survival of the fittest. We discussed the meaning of it, why it is necessary, and of course the circle of life. Unfortunately for E1 there was no beautiful Mufasa, Simba, Nala, or anyone else from Disney to sing a song about animals killing each other.

Now it is really time to leave for tennis and the fucking dog will not let the damn dead turtle go. So with as much bravery as I can muster, I put a bowl of water outside for the dog and leave him there with his damn dead friend.

When we return from tennis, I can still hear the idiot barking. I first think, "Shit he killed something else." Nope. He has put the turtle in the middle of the yard and is just barking at it. Moron. Dumb dog.

E1 wants to go outside. E2 follows. Apollo chases them with the turtle in his mouth to show them his work. He is so proud. E1 climbs to the top of the dome, yelling and E2 is frozen. CRAP. I, again, muster up bravery and scoop E2 up and bring her inside. I, again, yell at the damn dog to put the fucking turtle down. HE WILL NOT RELEASE.

A few minutes pass and Apollo, now HOT and DEHYDRATED, decides to leave the turtle and come inside. Cue the phone call to the neighbor. Neighbor comes over, gets turtle, and leaves. Bless the neighbor.

Jewish moms are crazy, but we do not dispose of reptiles. 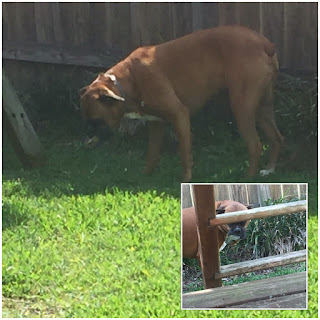 *Turtle update: According to my neighbors, they placed the turtle at the bank of the lake (there is a lake across the street from us) and by the time they finished dinner, the turtle was gone. MAYBE he swam to freedom or maybe a vulture got him. I don't give a rat's ass as long since it is out of my yard.