It is almost summer! Summer time means arts & crafts, playing, learning, baking, etc in this house. I will still post funny stories, but we are coming up on the time when the majority of posts will be activities I am doing with my kiddos. 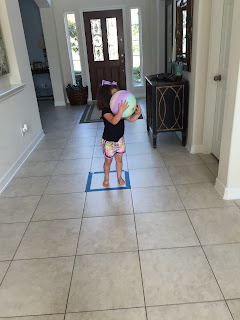 Yesterday I purchased a bouncy ball at Five Below. I love this store! So cheap and better quality than the dollar store.

E2 loves to play catch or "bally ball." In an effort to help her motor skills, eye hand coordination, and speech I created a new version of bally ball and she cannot get enough.

With blue painters tape I created two squares on my tile floor.  The two people playing bally ball stand in their designated squares. You then bounce the ball to one another. Yep, catch. The painters tape made it more fun for E2, so I rolled with it....I still call it catch, but whatever.

Bally ball, a simple game of catch with a simple twist.

E2 was a kid that could barely catch the ball and the blue squares helped her understand her body movements within space. The squares were a visual cue that were able to help her engage her entire body. It only took a few times before she started catching the ball 100%. She realized with her feet in the square how to move correctly to catch the ball. E2 learned how to take only one step to reach the ball vs running towards a moving ball and then not being able to catch it. E2 gained motor knowledge she clearly needed.

Blue squares to the rescue.
E2 is a proud winner of bally ball.
Posted by Tomboys in Tiaras at 8:38 AM