In this day and age, feelings are most important. We should not make children feel badly so everyone gets an award. This concept annoys the piss out of me. Some kids are phenomenal athletes, some are high achieving scholars, some are excellent nose pickers and some are amazing tantrum throwers. What they all have in common is all they get the same award. At the end of the school year, the end of a sport season, they all get the same trophy. We are all the same. No one is better because that reality hurts feelings.

I call bullshit. May the best player win. May the top student receive the award. Survival of the fittest. You want a trophy? You want an award? You want recognition? Work harder to be better. This everyone wins is crap.

I promise you I thought this way and in some respects I still do, but now I see the other side. I still believe children must learn their strengths and weaknesses. They must learn how to lose. They must learn others are smarter, faster, better at something than them. They must learn to rise above personal failure and strive to do better.

But, I am not sure at what age they need to learn this.

E1 is the award winner for academics and even gets praised on the tennis courts. She's "that kid." And the award for excellence in reading, math, science, etc goes to....E1. I'm her mother and while proud, it is enough already. Her shit actually does stink. The good news, all these damn awards do not go to her head. Unlike her mother, self esteem is not her strength. While she humbly accepts these awards my heart breaks for the student that worked his ass off to learn to read, or to learn to add, or learned to share. Where are the awards for these children? Aren't they worthy of feeling good about themselves? This year the excellence in academics award is only given to those with averages of 93 or better in each subject. Holy shit balls. That's a challenge! That is some serious academic excellence. What about the student that has a 92.3. Poor schlub. She doesn't get the excellence award. Hot damn. When did a 92 not scream excellence? Yes, I recognize this thinking is what lead us down the path of everyone is a winner. Awards separate the men from the boys. I guess I should count my blessings that E1 is "one of the men" and no longer worry about "the boys" on awards day.

What truly caused me to look at this topic differently? To really see this from another perspective? E2

E2 is the child with no awards. She is the sweetest, most hard working child I know. Because of her delays she is not the smartest in her class or the best athlete on the field. E2 is not great at softball. She is barely good. What she is, is learning. Motor planning delays and playing a sport is like trying to get oil and water to mix. Language delays and playing a team sport is like trying to shake a soda can and open it without the soda exploding. Playing softball is the MOST challenging thing E2 has ever experienced.
She cried when she missed the ball at bat.
She cried when she could not field the ball.
She cried when the players on her team ran faster for the ball.
She cried when it hurt her legs to squat for so long.
She cried when she did not remember the players' names so telling her who to throw the ball to was pointless.
She cried when she did not understand the directions of what to do.
She cried. She cried. She cried.
So what did we do? We practiced every single day. Every afternoon, in our backyard (so no one would see her) we played softball. She practiced and she learned. E2 can catch a ball in the outfield. E2 can throw the ball to girl X. E2 can throw the ball to first. Hell, E2 can throw the ball! E2 can squat, run, and believe it or not - she can hit that fucking ball with the bat! Holy shit! E2 can play softball! Is she the best? Nope, not even close.

That trophy gave E2 something a mother's love, a friend's love, a relative's love can never do because love is blind.

But a trophy? A trophy shows everyone, "You are a winner." 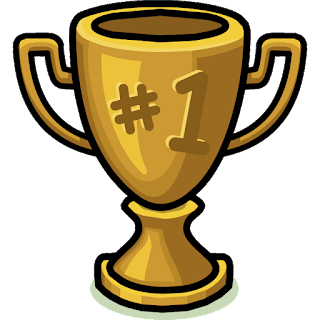 Posted by Tomboys in Tiaras at 8:33 PM