Need the back story? Read here.

What was supposed to be a lesson in "you are privileged" and need to understand "tough times" quickly turned into many lessons that I did not expect and a realization on my part that I cannot actually teach poverty. Yes, I can expose Penelope and Pandora to other parts of the world and we can volunteer our time in helping others, but I cannot actually teach what it is like to grow up in poverty. I have never been in fear of my lights being shut off or being evicted. I have never lived a life in which I could not afford the basic needs. I know I am privileged and giving my children a privileged life, which I cannot change or apologize for. What I can do is try to engage in meaningful conversations with my children, help them learn the value of hard work, the importance of budgeting, and an understanding that they have it better than many.

So.....
With her food taking up a small section of our counter and $19 (not 40) in her wallet, we began the life lesson first thing Sunday morning even though the hubs literally said, "Oh..we are still doing this?"

Penelope woke up and eagerly had one of her coveted croissants for breakfast. Lunch was plain pasta and cupped pears. This pasta was the first lesson of many. Penelope cooked her own pasta -  she filled the pot with water, turned on the gas stove, learned to add olive oil and sprinkle salt into the water, how long it takes water to boil, and how to tell if the pasta is cooked. While I supervised, Penelope learned to cook a basic meal.  She was nervous and excited and proud. So proud that when I offered her to empty the dishwasher for some money, her response?
"What's the point of doing the chore? I still have money."
SIGH. Case in point why we started this damn lesson.
A few snacks were had: pudding and a granola bar.
Dinner was interesting as she ate microwavable Easy Mac and successfully peeled her potato and cut it into slices to make fries. Penelope is a master of peeling potatoes...I can thank Hanukkah traditions for that!

What the hubs and I noticed this Sunday was Penelope did not waste her food. She ate everything she cooked. Penelope also only ate when she was hungry. One cannot eat because they are bored if one does not have enough food. Penelope also felt independent which was a good thing because the week was just starting.

Monday's breakfast was a croissant again....whatever. We had lunch plans scheduled, so Penelope brought her wallet and had previewed the menu so she was all set. I reminded Penelope to put her wallet in her purse and because she is the smartest child I know she did not listen. Shockingly, the nine year old did not listen. We stopped at a store before lunch. As we were leaving the store, walking to lunch, I asked Penelope where her wallet was.....DEEP FUCKING BREATHS because it is not with her. She left it "somewhere" in the store. "Maybe on a shelf?" I gave her the eye glare that I learned from My Aunt C and trust me, this eye glare could be used in terrorist interrogations. Penelope walked swiftly to the store and because she is one lucky bitch or because G-d didn't want me to lose my shit, she found her wallet.

Penelope got her own bill at lunch and ordered the cheapest lunch option and water to drink. #winning
She learned how to face bills the proper way when paying cash and learned about tax and making change. All in all she was a good sport while we were out to lunch. 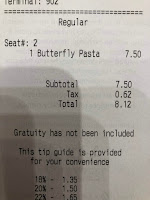 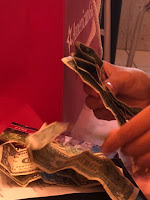 When we got home I asked her again if she wanted to complete a chore for money (sweeping the kitchen floor). This time, after finally paying for a meal, she agreed to sweeping. Because it is Penelope and because she is a child, the job was quickly done and done in a half-ass manner. Half ass job gets half ass money....THAT pissed her off. I told her in the real world she might have been fired and not paid at all. An eye roll and back to reading her Harry Potter was the reaction. Penelope's dinner was tuna fish and canned pineapples. She paid me $1 and "bought" another potato - the love of fries is strong in my young Jedi.

Tuesday Penelope woke up more willing to participate? Hungry? With a realization I was holding firm? I am not sure why, but she asked for a "big job" worth "a lot of money." Um....How about she cleans out the garage? After eating her daily croissant (seriously, what the fuck with the croissants?), she got to work. Tears and sweat were experienced. Each time she thought she was finished, she wasn't. There was no half assing this. After Penelope truly finished cleaning the garage one of the best unexpected lessons happened. Penelope said to me, "I get it. I get why daddy is so tired when he comes home. Hard work is exhausting." My heart filled with such pride, I almost ended the week right then and there! (But I didn't) 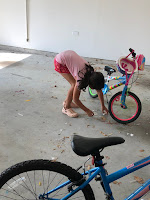 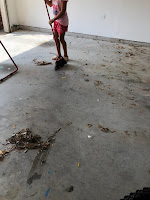 We went back to school shopping and were headed home when Miss Money Bags asked me to stop at the froyo place...funny how when Penelope is paying the yogurt and toppings weigh in at single digits. 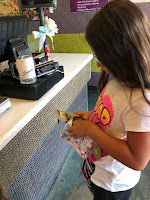 Penelope ate more Easy Mac, pudding, cupped mandarin oranges, and bought another baked potato from us along with butter and cheese.

Penelope started with $19, earned money for sweeping and doing a damn great job cleaning the garage, spent money at lunch, froyo, and on baked potatoes and fixings. We reminded Penelope that we would double anything she saved.

Wednesday is no longer hump day. It is forever burn a hole in my pocket day. Like a girl without a care in the world and so much money she clearly thought she was rich, Penelope spent the day spending. Of course we couldn't leave the house before she ate a damn croissant. Chick Fil A for lunch, but an adult sized meal because she could afford it....a double scoop of ice cream with sprinkles in a waffle cone later on that day because... she could afford it and my favorite part of the "let me piss away all my money" day was dinner.....a shirley temple, an appetizer, and a main course. 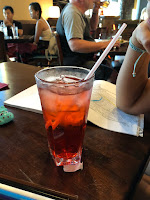 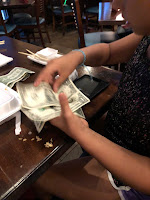 Each instance, Penelope had her own bill. Each instance she physically counted her money. Each instance, I thought would be her last. Nope, not at all because she is a child. This is when I realized she cannot begin to understand poverty. She has never been exposed to it, never met anyone living in poverty, never even heard a story. And let's get real, all the poverty she has seen during our trips to other countries is eventually forgotten because she is a child vacationing to other countries....privileged. So, I began to focus more on budgeting, money management, saving, etc.

Oh Thursday, you were no fun. Penelope realized she wasted all her money. She did not realize this on her own, but more from me asking Pandora where we should go for dinner and/or a fun treat, etc. After truly realizing she made a mistake and saying "I get it. I swear I understand the saying money doesn't grow on trees" we decided to spend the day at home playing and doing summer work. I am not sure if it was the poor diet or the lack of money or just that she is almost ten, Penelope lost her shit. I SO love preteen tantrums....is there a "stop being an asshole" pill? No? Just checking.

Because she's a week away from 10 (I will cry about this later), we have been practicing her being home alone. So while she was pissy and rude and less desirable, I told Pandora, "Let's go." Penelope was flabbergasted that I was leaving. I reminded her she was old enough to be alone and since she was being icky, we were leaving and when we got back I hoped her work would be finished and her attitude would be better. Pandora and I left for about 15 minutes and just because I am a jackass, I let Pandora walk into the house holding her Icee. Penelope's face said "Are you fucking kidding me?" but her words said, "I'm sorry."

The last day, Friday, arrived. Cereal for breakfast because the damn croissants were finally finished. Penelope spent no money again and kept reminding me she had $7.07 and daddy said he would double it and it is so awesome that she has $14.14!!!
Penelope was feeling great until her bitch mom reminded her that at one point she had forty dollars and had she not blown it all Wednesday on a ridiculous amount of food, she would have EIGHTY dollars.

Cue the angry tears and the return of the attitude.

I will say overall I am happy we did this and I do believe Penelope learned many things - work ethic, the value of a dollar, how to save money, budgeting, self control, tax, tipping, responsibility, independence, and the best lesson of all - don't fuck with mom - she never caves.